Ocean Collection … just because it is summer!

New needle lace Ocean Collection  of amulet pendants is inspired by ever changing appearance of the Ocean Park Beach.
Every morning is different as sky and water blend in mix of colours and shades and give the beach unique mood and purpose for each day.

I feel tremendous awe contemplating the endless variations that had graced this shore for millions of years and I am deeply grateful for each moment that I can be present to witness this natural wonder. 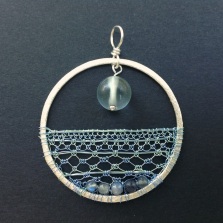 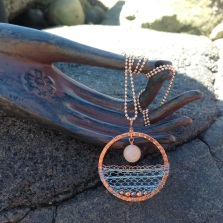 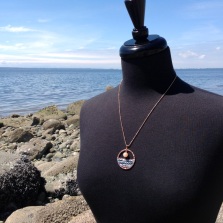 Needle Lace Amulet Pendants are miniature pictures that capture a moment in time. They happen spontaneously, without planning or drafting, imagination triggered by a feeling rather than an idea. Needle lace technique supports instinctive flow of work beautifully, allowing free movement of threads in the frame-defined space. Lace is made from very fine wire – copper, silver, gold or stainless steel – and is built slowly, one stitch at the time.

I will participate in outdoor market in Ocean Park!
If it’s within your reach, please come and visit my table to see new needle lace and bobbin lace wearable art, watch lacemaking demonstration or to enroll in upcoming lacemaking classes.

Please note: The festival is from Friday to Sunday, but I will have my booth set-up only on Sunday. Don’t miss me 🙂

New work added to the Gallery

Memory of this World triptych

Exhibition – Art of the Lacemaker

My new work, a triptych “Memory of this World” will be exhibited in the Guelph Civic Museum as a part of the special exhibition The Art of the Lacemaker (Revisited). The show, curated by Dr. Joyce Taylor Dawson and Nancy Pye, will feature renowned Ruhland Collection of laces from the 17th to 20th centuries plus MEMORY, a small but exciting selection of new works created by Contemporary Canadian Lacemaker/Artists. In conjunction with the exhibition, there will be a special series of four lectures on lace entitled Sunday Matinée with tea and cakes to follow and a unique programme of hands-on workshops related to facets of lacemaking and collecting.

Not to be missed, if you are a lacemaker, lace collector or lace connoisuer, or if you want to become one!

The work was inspired by Venus Passage, a rare celestial alignment that blissfully happened in this lifetime and allowed us to contemplate the vastness of the universal harmony. The central part, Venus with a Star, reflects divine love which permeates the whole cosmos. The second part, Venus with Water, realizes love in its nourishing aspect, which sustains life and maintains balance on our planet. The third part, Venus with Fire, focuses on the purifying power of love, which makes spirituality possible for each of us. Of course, the theme proved to be too big a task for my artistic as well as technical skill. I had been repeatedly humbled by my inability to recreate in lace the vivid images I saw in my mind’s eye. I turned for inspiration and strength to the art masterpieces of the past – renaissance, romanticism and classicism. I kept trying, stretching my existing skills and searching for new. Lace supported my efforts well, confirming that there are no limitations to the technique other than lacemaker’s own. I grew as I reworked the pieces again and again. Finally, I learned to accept this work as a process without a formal end, and I am presenting the triptych as such. I gave it my best, and I always will.

Love is the only miracle there is…

Venus with a Star

Love was a central theme to the Renaissance art, and became enshrined in timeless masterpieces that have inspired lovers and guided spiritual seekers ever since. Designs of plaited renaissance lace are based on sacred geometry and still cradle the original idea, the beginning of all laces. These patterns represent the first form that originated from the formless creative energy. In Venus’s elaborate aura they affirm the presence of expansive cosmic consciousness. Outline of a female body invokes the feminine principle, which receives the energy and gives it life. Focal point of the picture is the four-pointed star positioned conspicuously on mons Venus, which places love firmly on earth and in women’s womb.

Contemplating love that cares, nourishes and protects naturally brought memories of my childhood into the picture. I grew up with folks who were capable of loving each other and their children, who sang and danced in joy as well as sadness, who did not loose their sense of humour even in the most trying circumstances. Their roots deeply in the earth, they used to worship nature as manifestation of the divine – hills, forests, soil, and most of all – water. Water springs, ponds, brooks and rivers were celebrated in sacred rituals, and eternalized in myths, tales and songs. Those inspired many artists, and the resulting culture flows like a mighty Vltava river throughout the people’s history. Melodies of a beloved symphonic poem of the same name, composed by Bedřich Smetana, were leading the dance of the bobbins on my lacemaking pillow and the lace poured in. Like a life-giving water that springs from the mons Venus, to nourish generations to come, like yin that in constantly changes and therefore defeats all obstacles, like love that is here now and forever.

The most absorbing from the three, Venus with Fire, has taken me beyond all my limits. The fire captivated  my senses and burned and melted rigid patterns and ideas one after another. Intense heat of the raw energy alternated regularly with feelings of loss and confusion.  I was lucky to have a guide for the work right from its conception, and her help was vital. Brunhild, a valkyrie and a shieldmaiden, protected me and led me through. I have learned a lot about this goddess-warrior who, of her free will decided to save pure love in this world. Seeing that the strong rule of her father Wotan (Odin), and an innate wisdom of her mother Erda (Earth), were no longer in a harmonious relationship, Brunhild was intuitively drawn to love and its power to restore balance of the masculine and feminine elements. To understand human love she sacrificed her immortality and experienced the duality of life of as a mortal woman and lover. In an ultimate offering she united with her beloved eternally by jumping into his funeral pyre. Her sacrifice restored love on earth and in heavens. Remembered in the old myths, and illuminated in Richard Wagner’s musical drama The Ring of the Niebelung, Brunhild’s message today is as timely as it is timeless.